Throwback Thursday – The making of the original Angry Birds trailer

Step into the time machine, folks. We’re going way back to – 2010? Ok, that’s not so far back. All the same, it was a simpler time for the Angry Birds. It was an angrier time. They had yet to branch off into seasons, or blast into Space. In fact, it was the year the very first Angry Birds trailer was created and uploaded to YouTube. Let’s take a look:

Whoa! Are those even the same birds? They look different, but the anger is definitely there.

In honor of throwback thursday, I had a chat with a couple of guys who were involved in the making of the trailer. And when I say “a couple of guys”, I mean:

So when I say “couple of guys”, I mean like, the guys.

Anyway, see the interview below for your reading pleasure!

So how were you both involved in making the original Angry Birds cinematic trailer?

LK: So my job was scripting, storyboarding, and directing. Also doing the sound effects and graphics.

NH: Me and Mikael were just looking at the creative side – basically taking responsibility for the direction of the project. We actually ordered the cinematic trailer from Lauri’s animation studio, Kombo.

Lauri, what were your initial thoughts when the Rovio guys came to you?

LK: Our team was expecting more like a game trailer project. We weren’t thinking that much of a narrative story. So when they pitched the idea to us at Kombo, they just had an idea that the birds will get super angry, there will be a lot of shouting – something just really absurd.

LK: We were like ok, we just have to do something crazy! We got excited about it, but at that time we were wondering how we’re going to pull this off because we were at first thinking that we would be cutting a simple trailer from game footage. 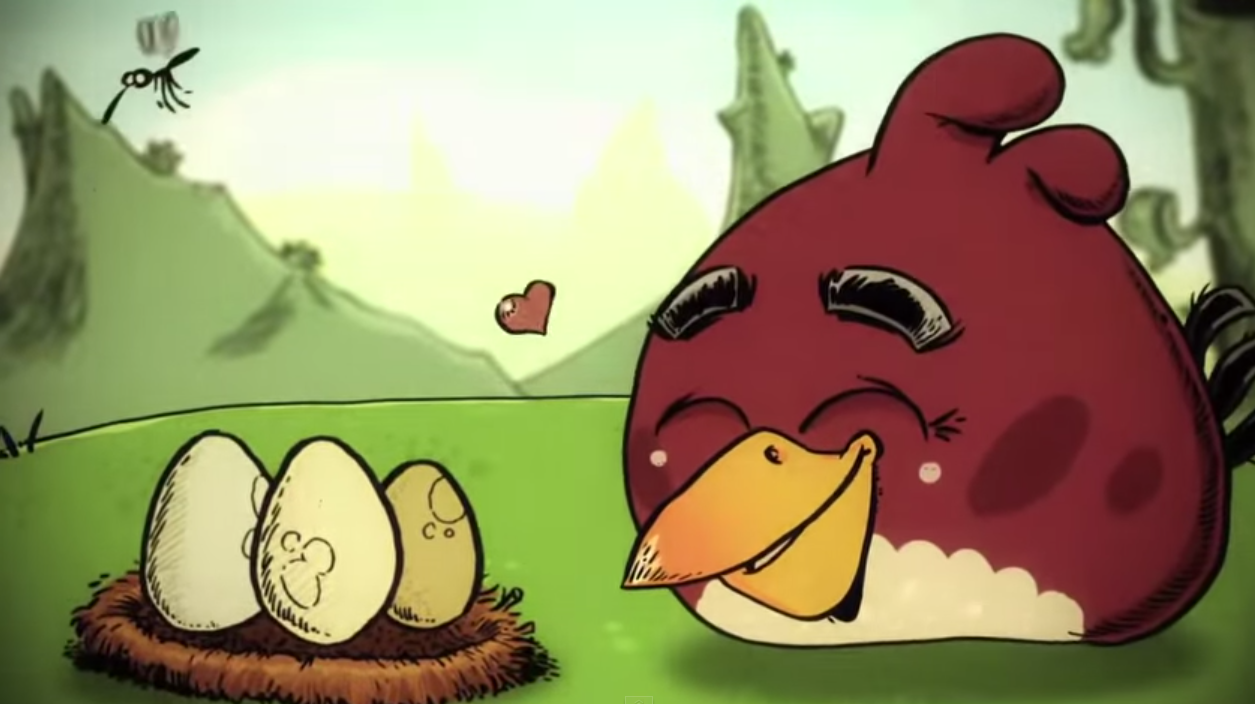 How did the Angry Birds story develop as you made the trailer? Was that stuff already established?

LK: When we got a call from Niklas, we knew about Angry Birds, but we didn’t know much about the backstory.

LK: It didn’t exist actually. So there weren’t these rules yet that there is only one red bird for example. All we had to go on was the game itself, and even in the the game, there was a title screen animation where there are two yellow birds. So that was one of the key questions at first. Do we have lots of these birds?

NH: At that time, Lauri and the guys were asking very fundamental questions. I mean, is there one Red bird, or are there many of those. And probably some of the answers we came up with were defining the Angry Birds story at the same time.

LK: Yeah, and one of the other big things we decided was that, even though there are lots of eggs in the game in different places, there are really only three eggs. That concept was defined in that trailer. Also, the guys were pitching the idea for the trailer that the birds would get angry when they are touched, but we started to turn it towards the eggs. So now, if anything happens to the eggs, the birds get super angry. They are super happy and jolly birds, but if someone touches the eggs, then they get psychotic – so psychotic in fact that they can actually forget the eggs [laughs], and that was the twist. So in later projects we carried those ideas over.

The birds and pigs look a bit different in the trailer than they do currently what’s up with that?

LK: I actually didn’t have any reference material for the characters when I was creating them for the trailer. I just got some screenshots from the game from a phone, and it was like the birds and pigs were these small pixelated things. You can’t actually see what the characters look like. So I just started to develop my own imaginative version of them from just looking at the game.

We actually did the whole trailer with my own versions of this Ren & Stimpy style of VERY fierce-looking pigs. The drool was everywhere, and they were very fierce! They had these huge teeth and bags under their eyes, and I got the trailer ready like that. Then Niklas calls me after seeing it and says “there’s a bit of a problem. we don’t like the pigs. It’s obviously disturbing” [laughs]. I was like “are you joking”?!

We have no budget left at this point, and I’m working with the smallest pigs ever as source material! [laughs] And Niklas is shouting in the background on the phone like “didn’t you send the references?! Noooo!” So they arranged an extra budget for us so that we were able to fix it and put some extra stuff there, and it started to become more like the pigs that you see now. Some really early storyboards even have pigs with arms fighting the mosquito. 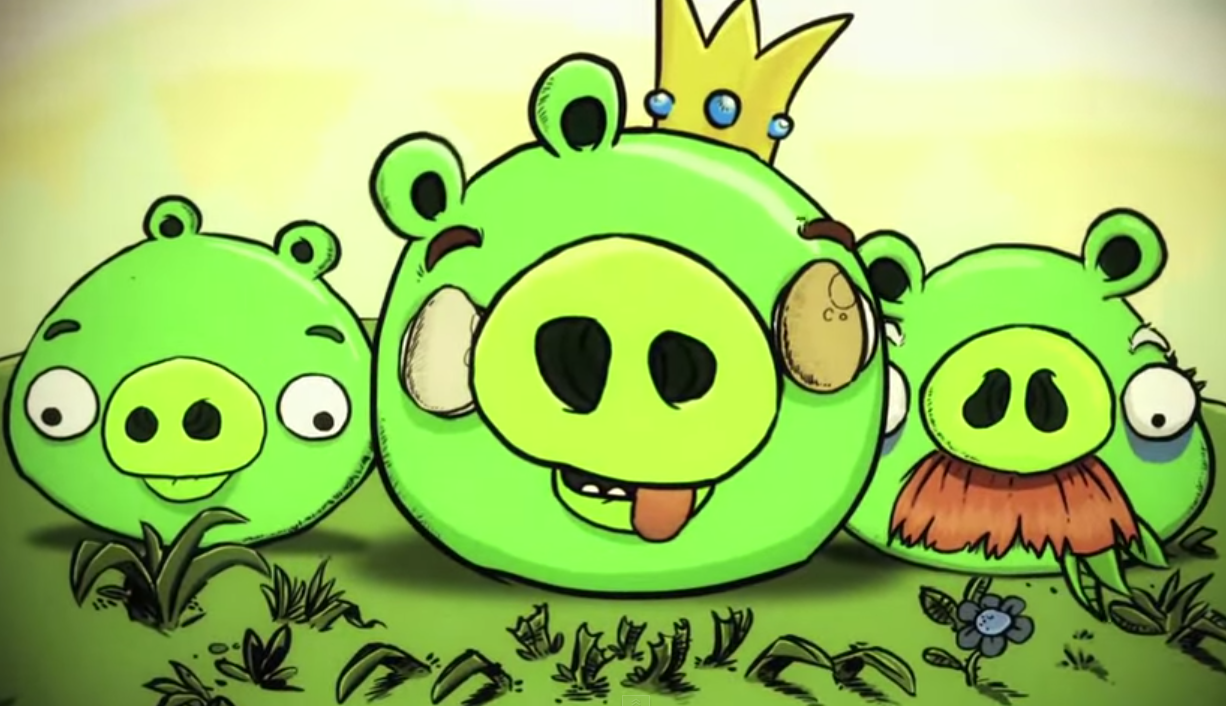 The sound and music in the trailer are awesome. How did the sound recording go?

LK: We did so that Ari Pulkkinen [composer of the Angry Birds theme] came into our office for one day and we were just saying “Ok, we need like narrative music in this part”, and we need this music here, and he did that in like one day. And on the same day, I did all the vocal performances for the birds. My first Red bird impression is the same one that they have imitated for other animations as well [Angry Bird Toons] – and I was imitating the bird sounds that the game team had made for the game in their office.

Were you surprised by how successful the trailer was?

LK: I sent the final trailer to Niklas and I said “ok, here it is. I’m going to do something else”. We didn’t know it was going to be huge. The trailer itself was something that – ok, we’ll do it and it will be super fun, but we didn’t know that it would get so many views.

After the very first weeks it was at something like half a million views. My face was like cold and frozen like “what is going on?!” Because especially in Finland you just don’t get that kind of visibility. After the initial shock I was just eating popcorn and watching the number of views go up on YouTube and hitting the refresh button. Millions and millions – it was like ten million when I called Niklas and we were like “this is impossible!” It was so exciting!

Last question. At 104,445,160 views on YouTube, the total viewing time for the original Angry Birds trailer is almost 300 years. Where do you see Angry Birds 300 years from now?

NH: Actually we’re carefully planning towards that. We have a 300 year plan, and in 300 years, the eggs are finally going to hatch – but here’s the good part! Inside the eggs there will be…