IT’S ON IN THE AMAZON! NEW ANGRY BIRDS RIO UPDATE!

The World Cup may be over, but there’s still plenty going on down in Rio! To celebrate RIO 2 coming out on DVD in the US, we’ve a brand new update for Angry Birds Rio – the Timber Tumble episode! Read on to find out about the update, some info on conservation efforts in the Amazon about our exclusive competition. 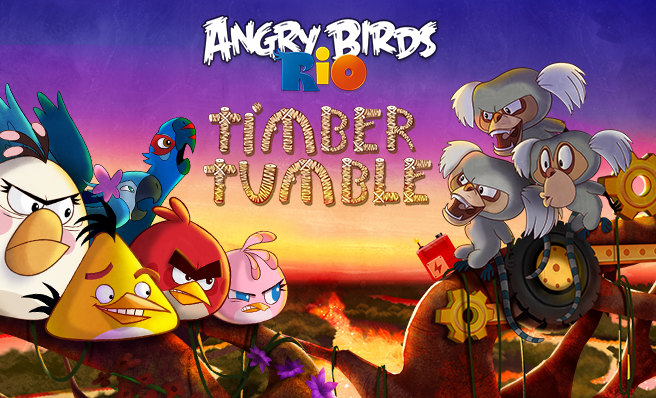 It’s as intense as ever – this time those mad monkeys have got their hands on some logging equipment, so get ready to shout TIMBER!There are 20 super-challenging new levels packed with pesky primates, plus six tricky bonus levels to unlock.

There’s also a new power-up called Call The Flock, great when you need a bit more demolition help from your Macaw buddies! You’ll also notice that we’ve changed Super Seeds into Power Potion – this is because monkey mashing is thirsty work! So go and juice up your bird with a bit more destructive power!

Plus, if you get stuck or you’re finding it just too hard to get three stars on each level, then you can get a little tip on how to cause maximum damage to those monkeys! Check out the gameplay trailer!

We’ve teamed up with Fox and WWF to raise awareness for the Amazon and its inhabitants. Did you know that three football pitches of the Amazon forest is lost every minute due to deforestation?

WWF has been working in the Amazon for 40 years and is at the forefront of efforts to protect the forests, species and people that call it home. Protecting the Amazon is no game however, and you can take part in saving animals including the pink river dolphin and the macaw. Read how here and check out this beautiful video about the macaws.

Over the next couple of weeks, we’ll be giving away some Rio 2 DVDs (US only), Rio 2 Soundtrack CDs, some WWF plush toys and some Angry Birds plushies. Just follow us on Facebook and Twitter for your chance to get your hands on some of this cool merch!