Angry Tales of Terror: A Fungus in our midst

A new chapter in the trilogy of Halloween tournaments in Angry Birds Friends begins today! This time, we’re headed to a cityscape invaded by unwanted planty invaders that seem to be infecting the population. Watch out for infested pigs!

In other news, for this one tournament, you will receive double the ratings! That means you can move up in the league twice as fast. Diamond tier is within sight… 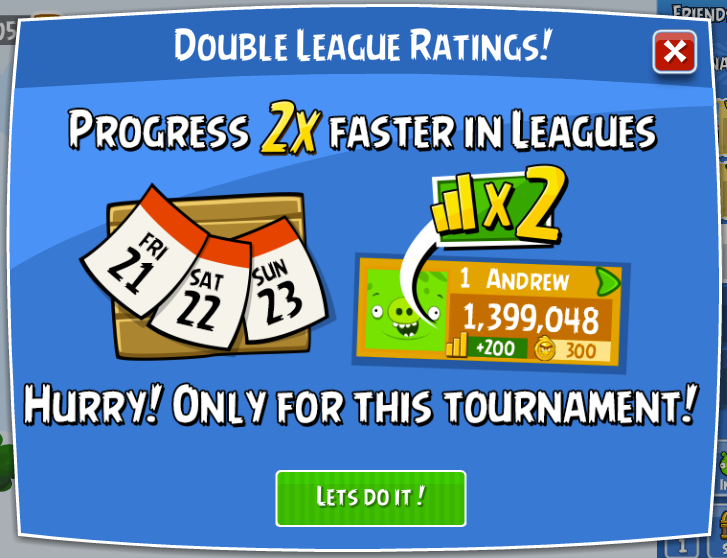 Andrew is killing it!

Play the tournament here until Monday the 24th!

Now, brace yourself for the first part of the second entry in the Angry Tales of Terror series: A Fungus in our Midst.

The rolling door of a loading dock opens in the brisk autumn morning air. A vehicle bursting with produce from the countryside backs up to the dock with a resounding beep beep beep. A few groggy worker pigs hustle groggily from the interior of the building to meet the vehicle and relieve the buggy of its payload.

There has been a huge increase in the amount and size of the fruits and vegetables coming in from the country’s farms in recent days, and the grocery stores in Pig City have been bursting at the seams with the copious amount of product coming in. Households of pigs are stocking their cupboards for the upcoming Hamoween feast, and the recent surplus guarantees that all homes will have an impressive spread come Hamoween.

But for now, someone has to move these monster veggies, and that’s how Gaz brings home the snoutlings. He helps his co-workers clear the cart, hauling the pumpkins, squash, tomatoes, watermelons, apples, peaches, and so on from the cart. There are always some runts left over that are not fit for display in the store (manager’s rules), and Gaz always shares these leftovers with his workmates. They are pigs after all. A little mold never hurt anyone, right? However, this time, the moldy fruits were crested with small, bulbous mushrooms sprouting from the white moldy fuzz. When agitated, the mushrooms billow forth with a brown cloud of spores. Bonus!

After unloading the shipment, the worker pigs rest on the loading dock to snack on their treats. Another shipment down, another stack of snoutlings in their pockets, and a few moldy treats to boot. Life is good. After a hard day’s work, they return to their homes and their families.

The rolling door of a loading dock opens in the brisk autumn morning air. A vehicle bursting with produce from the countryside backs up to the dock with a resounding beep beep beep. The driver of the cart waits for the pigs to come unload the goods. They’re usually here waiting, but not today. The driver kicks around a few pebbles for a while, growing more impatient with the passing time. This isn’t the only delivery he has to make today. Don’t these pigs understand?

After some time, the manager of the store, that’s Kev, arrives to the loading dock, a perplexed look on his face. Where are his dudes? He apologizes to the driver, whose anger is evident by his flushed face and the jets of exhaled breath that are emitting from his snout in the cold air. Together, and with great effort, they unload the shipment, and the driver is on his way.

Mildly concerned, but mostly angry at their irresponsibility, Kev starts to call the homes of his workers. Gaz is first on the list. When he reaches Gaz’s wife, she tells him that Gaz left for work hours ago, but that he wasn’t acting like himself. He didn’t say a single word all morning. Contacting the families of the other workers, the manager gets the same story from each. There is definitely something fishy going on here.

Where are these pigs? The lonely Kev goes about the daily business of tidying the store before it opens, resolving to get to the bottom of this mystery as soon as his day’s work is done. Sorting through the produce, he picks out the moldy ones, which are now sprouting small, bulbous mushrooms that eject a cloud of spores when agitated. “Bonus!” he thinks to himself as he chomps down on a partially decomposed peach, the cloud of spores wafting around his face.