Angry Tales of Terror: Friends ‘til the End, Part 2

Before we get to the conclusion of Friends ‘til the End, we’ve got some other Friends-related news to attend to: today begins Halloween Mania in Angry Birds Friends! 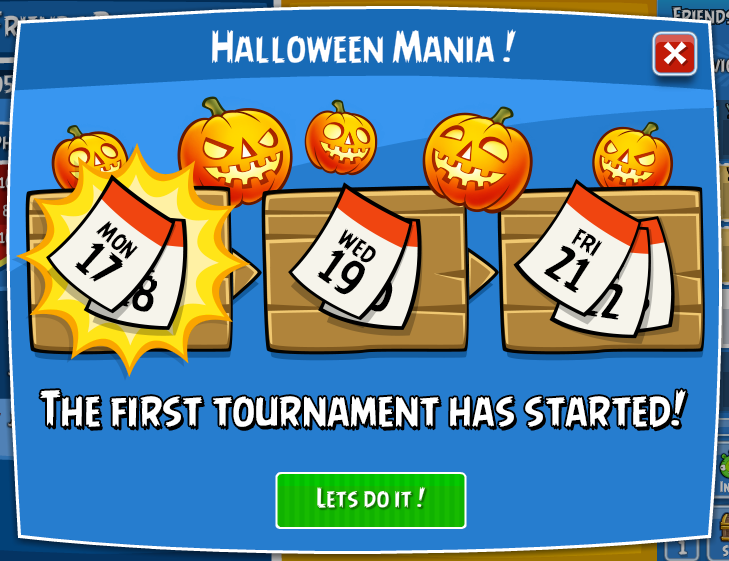 Get crazy for Halloween Mania!

From now until Oct. 23, there will be three whole tournaments of six levels each! If you’re crazy enough to rise to the challenge and take down all 18 levels, there’s a chance for some serious rewardage/league tier move-up-age. Play here!

Now, without further ado (unless you haven’t read part 1, in which case, read it here) the conclusion to Friends ‘til the End!

The *SNAP* of the twig reaches Mort’s ears, and he turns quickly to investigate the source or the interruption to see his old friend staring, startled and wide eyed, in his direction. Mort stares back with a similar expression, and it takes a second or two for the pig to recover, stammering embarrassedly, “Oh–– Sam… Hi?”

Sam understood, Mort didn’t want to make him feel any worse. Sam was about to start on his way back home when he noticed something. Something odd. From his vantage point, Sam could see Mort’s friend a little better. Although the friend was the same green hue as a pig, this was in fact not a pig at all. The green orb was striated with vine-like veins that grew more prominent towards the base of it. They plunged into the ground, weaving into the surrounding soil. It was surrounded by leaf-like appendages. No, this wasn’t a pig at all. It was… a cabbage?

Sam broke out in uncontrollable laughter. “Mort. That’s a cabbage, dude. What are you doing?”

“Shhhhhhhhh! It doesn’t like loud noises.” Mort hissed in a whisper that was just as loud as a normal talking voice anyway.

Mort apologised for being distant lately, but he insisted that he had a good reason: the cabbage needed to be fed. He knew that something bad would happen if it went hungry. Something really bad. He didn’t know how he knew, but he knew.

“So you’ve been out here watering a cabbage for weeks?”

“Well, yeah. It needs water, and… other stuff. Keep your voice down, please.”

But Sam did not keep his voice down. Instead, he anchored himself in a position between Mort and the cabbage, and let loose on Mort with all of the anger he could muster, “YOU’VE BEEN PLAYING HOUSE WITH A CABBAGE FOR OVER A MONTH AND I’VE BEEN WORKING MY RUMP OFF ON THE FARM DO YOU HAVE ANY IDEA HOW HEAVY THESE PUMPKINS ARE HOW MANY TONS OF OINK OINK OINK OINK…”

Mort slowly backed away from Sam to protect himself from the verbal onslaught, not to mention the specks of saliva that were emitting from Sam’s mouth from the sheer force of the throat shredding assault. But there was another reason for Mort to be retreating. Behind Sam, the cabbage twitched with every percussive consonant that Sam uttered.

“SAM! You have to be quiet,” Mort continued his retreat.

It opened in layers. First leaves, fluttering outward. Then, deep red petals. Then finally, a mouth lined with razor sharp thorns, fragrant nectar glistening at their tips, a bottomless throat lined with prickly stamen. Sam would have seen all of this if he had just turned around. Instead, Sam only saw the look of terror on his friend’s face as the world turned black around him.

You can be sure that this cabbage-like monstrosity was not the only one of its kind. Not by a long shot. A truth that the birds are realizing as we speak in Angry Birds Friends. Play the Halloween Tournaments to get to root of the problem yourself!